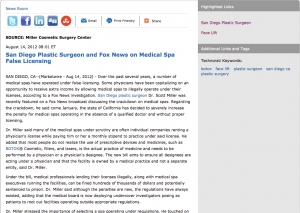 San Diego, CA — Over the past several years, a number of medical spas have operated under false licensing. Some physicians have been capitalizing on an opportunity to receive extra income by allowing medical spas to illegally operate under their licenses, according to a Fox News investigation. San Diego plastic surgeon Dr. Scott Miller was recently featured on a Fox News broadcast discussing the crackdown on medical spas. Regarding the crackdown, he said come January, the state of California has decided to severely increase the penalty for medical spas operating in the absence of a qualified doctor and without proper licensing.

Dr. Miller said many of the medical spas under scrutiny are often individual companies renting a physician’s license while paying him or her a monthly stipend to practice under said license. He added that most people do not realize the use of prescriptive devices and medicines, such as BOTOX® Cosmetic, fillers, and lasers, is the actual practice of medicine and needs to be performed by a physician or a physician’s designee. The new bill aims to ensure all designees are acting under a physician and that the facility is owned by a medical practice and not a separate entity, said Dr. Miller.

Under the bill, medical professionals lending their licenses illegally, along with medical spa executives running the facilities, can be fined hundreds of thousands of dollars and potentially sentenced to prison. Dr. Miller said although the penalties are new, the regulations have always existed, adding that the medical board is now deploying undercover investigators posing as patients to root out facilities operating outside appropriate regulations.

Dr. Miller stressed the importance of selecting a spa operating under regulations. He touched on a patient who recently went to a spa without getting a “good-faith” prior exam and essentially received a large volume of filler to achieve a result that was not attainable through injectables. He said somebody should have explained to her she needed to have a face lift in order to achieve that particular result, adding that the injectables have now gone into tissue, which Dr. Miller says can be harmful, and the patient is dealing with the consequences.

Despite the licensing issues, Dr. Miller also stated that not all medical spas are untrustworthy and many do follow the appropriate regulations and models. He says in order to ensure ethical treatment, patients should always inquire about who the medical director is, what his or her specialty is, and how much he or she is involved.

After earning his medical degree from the University of California, Irvine, Dr. Scott Miller completed his residency in plastic and reconstructive surgery and advanced fellowship training in aesthetic cosmetic surgery. He is a member of the American Society of Plastic Surgery, as well as many other prestigious medical affiliations. Dr. Miller is board-certified by the American Board of Plastic Surgery and dedicated to the enhancement of patient care.