Del Mar resident Dr. Scott Miller is fortunate in that he experiences many rewarding moments in his career as a cosmetic and reconstructive plastic surgeon, but none more so than in the work he does through his involvement with the Interface International Surgery Program. His work with the program takes him to various areas of Mexico where, as part of a medical team, he operates on children with disfiguring birth defects or accident related disfigurements.

Miller said he became involved in the program because he liked the vision of its founder, Dr. Jack Fisher, who established the program at UCSD in the late ’70s.

“I have looked at a number of these types of programs and where I feel they always get themselves in trouble or fall short is they try to be too grandiose-I liked the fact that Jack has always kept this program small,” Miller said. “We go to small colonies in Mexico that are underserved but we don’t go and say, ‘Here we are to save the day, now move over’; instead, we come together with them and say we are there to offer our assistance. Some of these locations have excellent plastic surgeons, what they often don’t have is the facilities and supplies and ancillary personnel needed. We offer them the wherewithal to do their work-sometimes we will learn as much from them as they do from us.”

Miller said the group travels down to Mexico about six times a year and he goes on about three of those trips. They bring with them equipment such as portable suction kits and anesthesia machines so they can turn ordinary rooms into operating rooms. Miller said they also bring with them a team of personnel specializing in different areas because many of the congenital defects they deal with need more than just one type of treatment, for example, in addition to plastic surgery the patient may need dental work or speech therapy.

“Our triage consists of multiple stations with mini-clinics so if I see a patient whose palate is not closing properly I may send him over to the speech pathology station to be assessed there, or if I see a patient who has bicuspid teeth coming in and he needs some bone in there then I send him to see the oral surgeon about a possible bone graft so his tooth can grow through a solid foundation,” Miller said.

Miller’s group generally goes to a specific spot in Mexico for three to five days at a time and set up a clinic with about five rooms. On the first day they see patients, make a determination for treatment for each patient and then create a schedule for the next few days that will allow the medical team to perform all the treatments necessary (and possible).

“We tell people when to come back, what to do in preparation for surgery, and have a pediatrician check them first to make sure they have not had a recent illness because that would prevent us from performing surgery,” Miller said.

He added that the three most common defects they treat are cleft lip – either on one side or both, cleft palate and cleft lip nasal deformity.

While Miller and his colleagues mostly work on children they also treat some adults.

“It is very rewarding because you go in there and see things that don’t look right on people and you leave there and they look and feel much better,” he said. “Now granted they are going to continue to have a certain amount of deformity and will need to have fine adjustments in the future, but you did the big thing and that is important.”

One of his most rewarding cases occurred recently and it involved a boy who fell from a third story window. Miller and his colleagues were treating children at a Red Cross center when they received an emergency call for help from a local hospital. The little boy who had fallen from the window had several severe facial fractures.

They didn’t have a plastic surgeon at the hospital, just an ear, nose, and throat doctor who needed assistance. So Miller and operating room technician Norman Kier went over to the hospital and worked as a team with the doctor to help the boy. 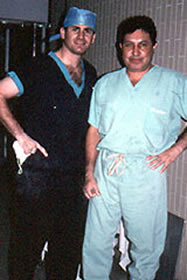 Dr. Scott Miller and a doctor in Mexico coming out of surgery

“It is amazing how much they can accomplish at those local hospitals without half of the equipment we have,” he said. “Some of the stuff we use almost seems superfluous. All of our stuff is disposable and all of their stuff is reusable, for obvious reasons. When we got there we determined the boy had a fracture of his mid-facial bone and a fracture of his palate, requiring mini-screws and a micro-facial kit which of course they didn’t have a the hospital. So my colleague and i discussed it with the doctor and we ended up using a hand held drill – the kind your 7-year old would have in his little tool kit. It was sterilized, of course, and we drilled two holes and using wire that wasn’t really the right kind of wire, we wired the bones together so this child would have a stable palate that wouldn’t float around when he ate, and wouldn’t develop growth deformities. It was an incredible experience.”

Miller said the experience was made even better by the appreciation the boy’s parents showed.

“As we left the boys parents came up to us and thanked us and asked us how they were going to pay us. That is interesting because in America when you come out of 13 hours of trauma surgery the first thing you usually hear is, ‘Is this covered by insurance, why did it take so long?’ – no thank you or how are we going to pay you. Of course, we told the boy’s parents that no payment was necessary, it was just so nice that they thought to even ask.”

Miller said on their last night in town he and his colleagues were out for dinner and the boy’s parents came over to the table and brought them four bottles of tequila – valuable items in that region – to say “thank you.”

“That was very heart warming and made us all feel very good,” Miller said. “The thing about these trips is that they are not really philanthropic or charitable because you get as much as you give. They make you feel so good that you feel like you are the one doing the taking.”

“I really made a decision to go into medicine based on what my day would be like,” he said. “I spent time with friends of my father’s, in their operating rooms, in their offices, and I decided it would be a really thrilling way to spend your day – working on people, helping people, talking to people – I liked all parts of it.”

In choosing his specialty, Miller considered several factors. First, he determined he wanted to be a surgeon because, as a lifelong sports and art enthusiast, he felt that performing surgery was much like creating art or participating in a sports event.
“I read these great articles by an author from the University of Chicago who was right on when he said art, surgery and sports all have one thing in common and that is a sort of state where you lose track of time because you are so engrossed in an activity. I just love that experience where time stands still.”

Miller is quick to dispel the myth that surgeons don’t like interacting with patients.

“I love seeing patients; this misconception that surgeons operate but they don’t like patient care is not true at all. There is no closer bond than between the surgeon and someone who allows them and trusts them to operate on them and make them better. That is an incredibly tight bond and I enjoy my relationships with my patients.”

However, he also realized that, to suit his personality, he needed the type of specialty where he could “fix the problem.”

“I do have a short attention span from that standpoint,” he said. “My father-in-law is an oncologist and it is a wonderful calling, it is unbelievable what he does. when we go out to dinner with him in Las Vegas people come up to him and hug him and kiss him and sat, ‘Thank God for you, you gave my wife Edna eight years she never would have had.’ But I realized I could never do that. I need to see a problem, go into the operating room, fix a problem, feel good about it and go home. My personality is such that I need that quicker feedback.”

Plastic surgery seemed a perfect match for Miller because it allowed him the satisfaction of the operating room, the fulfillment of working with and helping people, the thrill of immediate results, and a certain amount of creativity.

“Of all the surgical specialties it was the most creative to me and having that love of art in my background it meant a lot to me that each operation would be unique,” he said. “I actually spent time with a surgeon who was a classmate of my father’s and he saw a child with a deforming scar and he basically sat there with a pen drawing on the child’s face, developing a pattern that was going to be able to fix the deformity and give the child a better life. No to make light of other specialties because they are so important, but the fact that plastic surgery is so creative really appealed to me.”

Miller went to college and medical school and did his general surgery training at UC Irvine; he did his plastic surgery residency ay UCSD. In culmination he studied with one of the top experts in the field – Dr. Bruce Connell – and now Miller has been in private practice at the Scripps Medical Office Building in the La Jolla area for about 5 1/2 years. A member of the American Society of Plastic Surgeons, he is also an attending surgeon at Scripps Memorial Hospital in La Jolla, a voluntary clinical instructor of plastic surgery at UCSD, and the author of numerous articles and a chapter on facelift advances in a plastic surgery textbook. He and his wife, Lisa, have two boys, and one girl and have lived in Del Mar for about five years.

Looking to the future, he hopes to spread the word and get more people involved in the Interface International Surgery Program. In the meantime, Miller will continue to go down to Mexico as often as he can.

“I have found my calling and I feel blessed to do what I do,” he said.